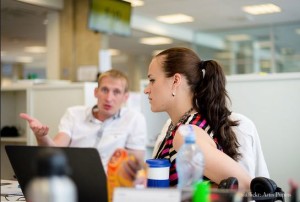 Team members who trust one another are going to feel comfortable engaging in unfiltered, passionate debate around issues and decisions.

There is a big difference between team members practicing healthy debate and conflict versus avoiding conflict or engaging in conflict that is destructive. During the Five Behaviors facilitation, team members agree to the guidelines and behaviors that would allow for healthy conflict. Leaders are comfortable encouraging healthy debate and conflict as it proves to open opportunities for new and creative ideas to flow for the purpose of problem solving and improving processes. Just imagine a team that can have healthy conflict over ideas and confront issues rather than allowing gossip and hallway whispering to create dissention. When we speak of mastering conflict, we are talking about productive, ideological conflict— passionate, unfiltered debate around issues of importance to the team.

Even among the best teams, conflict is always a little uncomfortable. No matter how clear you are that a conflict is focused on issues, not personalities, it is inevitable that at some point someone will feel personally attacked. It’s unrealistic for a team member to say, “I’m sorry, but I don’t agree with your approach to the project” and not expect the other person to feel some degree of personal rejection. However if team members are not making one another uncomfortable at times, if they never push one another outside of their emotional comfort zones during discussions, it is likely that they’re not making the best overall decisions for the organization.

As with all cultural changes, leadership is critical. For a team to be successful, the leader must understand the power of teamwork and be prepared to lead the effort in terms of setting an example and dedicating time to it. It’s important to note that many leaders who seem uninterested in teamwork are often just skeptical about the possibility of achieving it or afraid that acknowledging the need for it might reflect poorly on them. Success is possible as long as team leaders are willing to start and trust the facilitated process.

EDSI’s Five Behaviors of a Cohesive Team program is not your usual workplace training. It requires being bold and addressing the issues that get in the way of results. If done properly, it will enable a team to move into higher levels of performance and productivity.