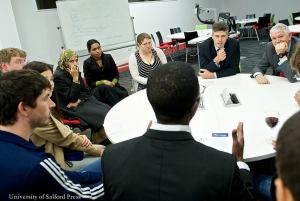 We’ve heard it said many times, “You can be a leader no matter what position you are in.”  It’s hard to argue with that statement! It’s a little tougher to live it out though. Why else would so many managers feel powerless to make a difference in their organizations; let alone anyone that isn’t in an actual authority position?

Don’t confuse leadership with authority. Imagine having a manager that often complained about several members of his own team to several other members of his team. His reasoning for doing this was that he didn’t hire them and didn’t have the authority to reprimand nor fire them. He felt powerless to do anything about their insubordination. At least it felt better to vent.

What he didn’t realize is that he was building a wall of insubordination out of the bricks of distrust and gossip.
There are several problems here, but the one we want to focus on is authority. Authority is important, but it’s not everything. In the real world, authority doesn’t always work. People don’t always listen to the person in charge.  And sometimes, they shouldn’t. What do you do when you either don’t have the authority or your authority isn’t working?

What we mean is that you have to temporarily abandon authority and use influence. Put your sales hat on. Learn about the person instead of the position. Understand what drives them, what their goals are, and what is holding them back. Focus on helping them with each of these.

The crazy thing about this approach is that by building a bridge with this person or persons and leading them across it, you will most likely gain the authority you originally needed. When your boss sees you take this approach, there’s a good chance that the next time you need to flex your authority muscle, it will be much stronger.

In the meantime, use your new found influence to build loyalty and trust; who knows…you may not even need the authority you thought you did!

Have you ever used influence in lieu of authority to get what you need? Authority matters in leadership but it is the result, not the cause. Difficult situations birth true leaders –not authority.

Leaders who keep their focus on the result, make meaningful progress, have strong relationships with team members, understand their strengths, weaknesses, desires and drivers…and also understand the “why” of what they are doing will soon find themselves bestowed with authority. Authority is typically earned after demonstration of effective leadership.
Unfortunately authority tends to lean towards the negative side of management, punishment, rather than the positive, expertise and ability. Authority is a tool that can be difficult to wield and can have a steep learning curve, but a true leader will master its intricacies in short order.