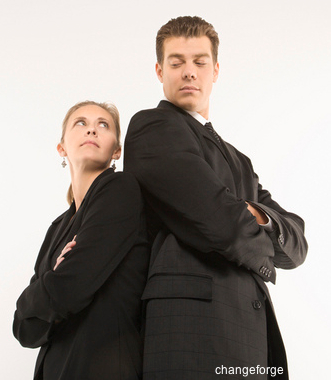 Conflict can be uncomfortable and is generally viewed as a negative in business and in life. Most people fear it and try to avoid it by being agreeable, by going along to get along. There is, however, a cost to that kind of harmony. An environment totally free of conflict is static. In the same way that friction creates heat and, properly managed, can ignite a fire, conflicting ideas and goals, properly channeled, can spark innovation.

Ron Ashkenas and Lisa Bodell add their voices in favor of what they term constructive conflict in their recent HBR article Nice Managers Embrace Conflict, Too with this bit of wisdom: “When people hesitate to speak up about poor practices or processes that don’t make sense, it creates a significant amount of unnecessary complexity and fosters a passive acceptance of the status quo.”

What is it about conflict that people fear? They fear its power, its ability to stir intense emotions such as anger, hostility, and defensiveness. But that same power, used positively, can excite creativity. It can energize and motivate.

Because of its negative aspect, societies have devised constructs to more safely use conflict or controversy in positive ways. Governments employ formal debate by opposing parties. Jesters, using comedy, physical antics, and music, had the ability to speak the truth to kings and noblemen in relative safety. In our own society, comedians, artists, and writers often fill that role, encouraging divergent perspectives by illuminating, exaggerating, and reflecting society back to itself.

In working with teams on projects, constructive conflict can be a useful and powerful tool, especially once a few strong directions for a project or solutions for a problem have been identified. It is just as important to know, and be able to address, the downsides of a solution, as its upsides. Knowing what ways your new product fails to satisfy some consumer needs will open up discussion for improvements. Brainstorming sessions where dissent and debate are encouraged can inspire a multitude of creative ideas.

If respectful dissent doesn’t come naturally to your team, you can encourage it by dividing the team into small groups and assigning each group to either defend an idea, or advocate against it. Ask each group to gather as much evidence as possible supporting the position that they represent, and be prepared to  present and defend their position at the next team meeting.

Since there is no question that conflict can be destructive, it is imperative to cultivate constructive conflict within your team with written guidelines to remind them to:

Participate;
Listen to everyone’s ideas whether or not they agree;
Be critical of ideas, not people;
Focus on coming to the best decision, not necessarily the decision they initially endorse;
Be willing to change their mind;
And remember: The perfect can be the enemy of the good.
Recent research* has shown that healthy conflict has the potential to deliver significant benefits, such as:

Focus the attention of all participants on the project or problem being considered;

Your assumptions are your windows on the world. Scrub them off every once in a while, or the light won’t come in.”
― Isaac Asimov