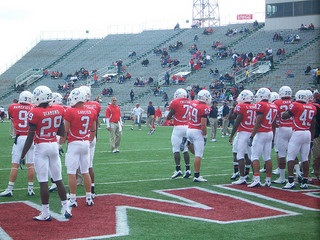 In six short years, Alabama head coach Nick Saban has completely transformed the Crimson Tide and vastly raised their stock in the world of college football.

How did this business major from West Virginia find such success in leading a foot ball team? A recent Fortune magazine article explains. At first it might seem odd to some to look to a football coach to improve leadership skills in the business world, but Saban has his leadership down to a science.

Just on figures alone, the article says: “If Saban were running a company instead of a football program, he’d be hailed as an elite manager. Alabama football is big business, and it has gotten only bigger under Saban. In 2006, the year before he arrived in Tuscaloosa, the athletic department brought in $67.7 million in revenue, mostly from football, and spent $60.6 million. Last year revenue was $124.5 million and expenditures were $105.1 million — leaving a $19.4 million profit, according to figures compiled by USA Today.” Clearly, Saban has strong personal effectiveness as a leader in the football business.

Saban’s life as a coach is extremely busy, so he doesn’t have time to waste on unimportant decisions. He eats the same healthy lunch each day and avoids spending time thinking about whether something else might be preferable to “a salad of iceberg lettuce and cherry tomatoes topped with turkey slices and fat-free honey Dijon dressing” during his working lunch. This is crucial, since “there is very little downtime in the world of Alabama football.” If you want to boost your own personal effectiveness, think about ways you can streamline and simplify your day to make more time to prioritize what is most important.

2. Focus on the Details

To maximize your personal effectiveness, you need an overall big picture of your goals, but you also need to think about the specific strategies to get you there. Saban is in tune with those details. According to the article, “What really separates Saban from the crowd is his organizational modus operandi. In Tuscaloosa they call it the Process. It’s an approach he implemented first in turnarounds at Michigan State and LSU and seems to have perfected at Alabama. He has a plan for everything. He has a detailed program for his players to follow, and he’s highly regimented. Above all, Saban keeps his players and coaches focused on execution — yes, another word for process — rather than results.” Basically, Saban gets all the details ironed out in advance, and he trains everyone to follow his specific procedures.

In the beginning, as players, coaches, and others are learning the system and getting the details into place, Saban pays close attention to individual details. “In other words he micromanages — but with a purpose. He sets expectations so that everyone understands what he wants, and then he can pull back.” After following through and getting the system in place, Saban can then trust his team to keep up the good work as a result of his training and leadership skills.

Despite placing great trust and responsibility on his players’ shoulders, Saban takes full responsibility if something goes wrong. Indeed, according to one player, “It’s always one voice. That’s all we’ve got here: one voice coming out of that chair. If we ever screw it up, he has always taken the blame and never pointed at a coach or a person or a kid. And I think that helps the whole organization.”