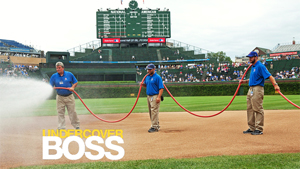 What insights can executives gain by going undercover as entry-level workers in their own companies? According to CBS’ Emmy-nominated series “Undercover Boss,” they can learn a series of valuable lessons. As a viewer, you would be wise to learn, too.

Each week, “Undercover Boss” follows a different corporate executive pretending to be a new employee in the company that he or she leads. CEOs at companies such as DIRECTV, Frontier Airlines and Great Wolf Resorts have participated. As the show’s website says about the experience of the executives:

While working alongside their employees, they see the effects that their decisions have on others, where the problems lie within their organizations and get an up-close look at both the good and the bad while discovering the unsung heroes who make their companies run.

Here are 5 things that you’ll learn from “Undercover Boss” by interpreting it as a mini management training course:

Several of the bosses became aware of issues in their companies only by experiencing them personally. For example, the COO of Waste Management realized that the garbage truck drivers didn’t have time for bathroom breaks because of overly demanding routes.  He was able to modify those policies, maintaining efficiency while taking better care of his workforce. Make a point of getting out of your office and spending time with your employees.

Dave Rife, owner and executive board member of White Castle, listened at length to the employees in the company’s fast food restaurants. This is what Rife took away from his conversations, which included both the personal and the professional:

I think I need to be a better listener. Sometimes you hear people but you don’t truly listen to what they’re really telling you. You don’t always read between the lines to pick up the nuance of what they’re telling you. Now I work hard to make sure I’m getting the true message that people are trying to send to me.

Larry O’Donnell, President and COO of Waste Management said that his undercover experience taught him the importance of employee development. Now the company regularly surveys all employees and gives management an engagement score.  Says O’Donnell:

We want to improve that engagement score throughout the company because we’ve seen the impact that having an engaged workforce can have on the company. Who better to ask how to improve the company than the people on the front line doing those jobs each and every day?

4. Give your employees plenty of room to grow within the company.

Episode after episode, the CEOs on “Undercover Boss” discover hidden gems on the ground floors of their companies. Often these employees love their jobs but have considered leaving because they don’t see a path for growth.

I think you do your very best to create the environment where people can be successful, then have a key eye toward recruiting and keeping talent. I really believe the competitive edge for any company ultimately comes down to attracting, hiring, training, and retaining talent.

Most of the undercover executives got their hands dirty on the job, from installing a DIRECTV satellite on a rooftop as a storm approached to emptying lavatories on a Frontier Airlines plane. While an air-conditioned office may be comfortable, it’s important to remember the day-to-day intensity of many entry-level jobs. Make a point of getting your own coffee sometimes, making your own copies or otherwise fending for yourself. It will make you a more compassionate manager.

What lessons have you learned from spending time with your employees? Leave a comment.

Take your management and employee development skills to the next level with Employee Development Systems, Inc. courses.